Why are Construction Profit Margins So Low?

by Magomed Galaev in Industry Insight 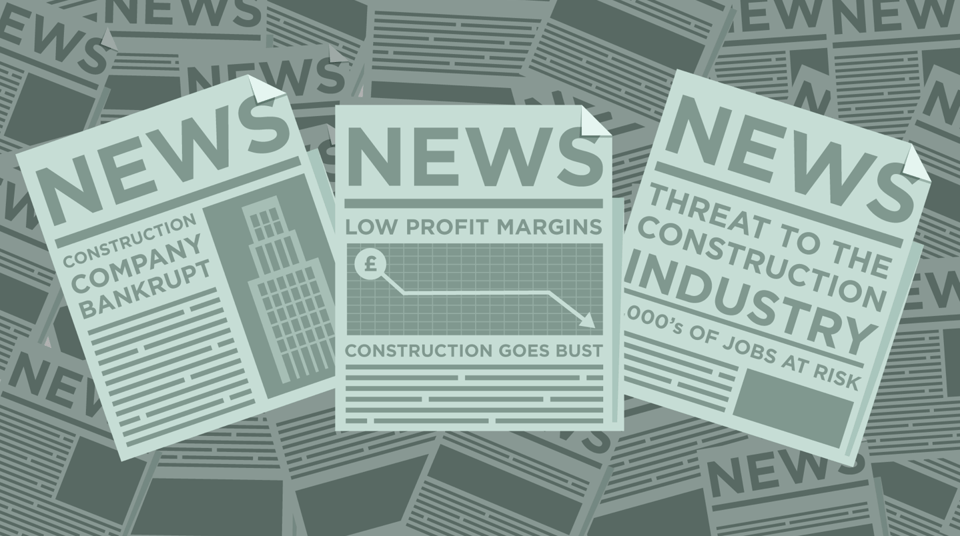 Construction profit margins have long been a controversial subject in the industry, with many citing them as a factor in the uncertain financial environment facing even the largest, most-established firms.

If you need proof of the fragile state of subcontracting businesses - look no further than the recent collapse of UK contractor Carillion.

In the aftermath of the long recession, contractors found themselves hit by so-called legacy contracts. These are jobs running over several years, agreed at low prices, that became unprofitable once material and labour prices increase. For example, in 2012, after hitting rock bottom in 2010, tender prices had begun to bounce back. But according to the Royal Institution of Chartered Surveyors, cost and labour inflation ran nearly twice as high at 7%.

In its 2017 analysis of the results of the top 10 largest contractors, including Balfour Beatty, Interserve and Laing O’Rourke, Construction News found that they had an average pre-tax profit margin of -0.5% as losses from problem contracts took their toll. Pre-tax losses totalled £52.9m on a combined turnover of £32bn. Meanwhile, the website theconstructionindex.co.uk reported profits for the largest 100 firms of just £1.1bn, equivalent to a margin of 1.5% on a £69.1bn turnover.

See also: How tech disruption will affect the property industry next

The chief executive of Balfour Beatty, Leo Quinn, has said that “margins below 5% are unsustainable.” However, construction profit margins of 1.5% to 2% are normal. In an online poll in Building magazine, for example, two thirds of respondents said margins were unlikely to reach 5% in the near future.

So even in better times contracting is precarious. The lethal cocktail of low margins and high risk puts even the biggest firms just a few problem contracts away from slipping into the red.

“The construction industry has suffered from low margins for a period of time, and has struggled to recover to the pre-financial crisis levels,” said consultancy PwC in a report published in 2017. “Whilst margins have had short periods of improvement, the overall trend over the last decade is one of decline.”

It added: “Higher margins in the UK construction sector tend to come from long-term relationships, such as five-year service contracts, rather than one-off building contracts. These long-term arrangements, such as for civils work, tend to be driven by organisations where establishing a relationship is key to accessing a pipeline of contracts.”

So why do contractors struggle to improve on margins?

Construction profit margins are the lowest of any industry except for retailing. A whole host of reasons explain the financial fragility of contracting businesses, especially the highly fragmented nature of the sector and lack of training and innovation leading to low productivity. In America, under 5% of builders work for construction firms that employ over 10,000 workers, compared with 23% in business services and 25% in manufacturing.

The sector is also highly cyclical. Companies will often bid at too low a price, in the expectation or hope they will make more money on a contract through ‘variations’.

One factor, though, can be clearly identified. According to a recent study, UK construction companies spend more than £3bn or 3% of their sales on bidding for construction work - and they write most of this expenditure off, as they win only one in five bids at best. To put the numbers in perspective, UK contractors spend 3 times more on bidding than the aggregate profit that they generate. Clearly, reducing bidding costs could dramatically improve the industry's financial health.

Pricing the job wrongly and dealing with risk

Contractors can also fail to calculate the true cost of a proposed project based on three essential elements: overhead, risk and direct costs.

The problems with the bidding process begin at the very earliest stage. Architects receive insufficient time and budget to create designs. With the increasing adoption of building information modelling (BIM) this means that all parties work on incomplete data from the very beginning of a project.

AT BEST, these projects result in razor-thin margins. With just a few mistakes or hiccups, projects lurch wildly towards financial loss, and - in many cases, like Carillion - financial collapse.

Of course - construction is not the only industry that’s subject to unpredictability and input price inflation. So why, specifically, does it suffer so badly?

It comes down to a total inability to price services adequately on an industry-wide scale. This systemic issue runs deeper than in any other industry. No other sector suffers from this problem on this scale over this length of time.

Many other industries operate on thin margins because they compete on price alone (the retail industry, for example). However, equally, they make sure that their gross margins - revenue minus costs - cover selling, general and administrative costs and generate a profit.

Construction projects, on the other hand, price on margins in the low single digits, leaving no cushion to absorb unforeseen costs. Little wonder, then, that small profits can quickly turn into losses - and, less frequently, financial disasters.

The solution, then, needs to be three-fold:

Contractors may see themselves in a chicken and egg situation. Low construction profit margins make it hard to invest in training and research and development, which in turn means that the industry has not embraced innovation and modern methods of construction that could improve productivity. A few building firms experiment with new techniques, such as 3D printing and automation. But the trade as a whole is reluctant to spend money on the sorts of technologies that have revolutionised so many other industries.

A McKinsey report published in 2017 Reinventing construction through a productivity revolution said that globally, labour-productivity growth in construction has averaged only 1% a year over the past two decades, compared with growth of 2.8% for the total world economy and 3.6% in the case of manufacturing.

It added: “The building trade is worth $10trn each year, or 13% of world output. If its productivity growth had matched that of manufacturing in the past 20 years, the world would be $1.6trn better off each year.”

The industry is crying out for a joined-up commercially sustainable way of operating, and is ripe for disruptive technologies to fix a broken model.

That’s what Kreo is here to do. Our software brings down the cost of bidding by reducing the amount of time spent doing manual, repetitive work. It uses machine learning and other AI methods to properly price construction projects, with accurate quantity takeoffs and scheduling that can then be optimised using ‘what-if’ scenarios, to scale the project according to the clients’ time and cost requirements. It also increases dramatically the productivity of the bidding teams by reducing time and effort require to prepare and price bids. The Construction Bidding Process – And Why It’s Fraught With Problems

Tender loving care: The true cost of bidding for work